Click edit to contribute or change information on this G-Shock's page. Thanks for participating!

Full Metal G-SHOCK yet handed down its pedigree, impact performance with adults watch "MR-G". Britain's prestigious traditional and modern sports to tell an adult "POLO" the theme of "Rutland Polo Club (RATTORANDOPOROKURABU)" tie-up model. Polo associated with traditional land-green color of the characters board adopt the characters on the plate polo events in his personal and so on to represent the metal processing and design.

Rutland Polo Club (RATTORANDOPOROKURABU), 1909, EHBaldock colonel rat by British Land was founded in traditional polo club. Two world wars is due to a temporary halt to activities in 1971 by Lieutenant Colonel APGilks reconstructed. United Kingdom, as well as New Zealand, Australia, Argentina, Kenya, India and to invite players from around the world competition and is the traditional and friendly club. The United Kingdom is also the crown prince twice a club in honor of the competition in a number of achievements by the cup or trophy. 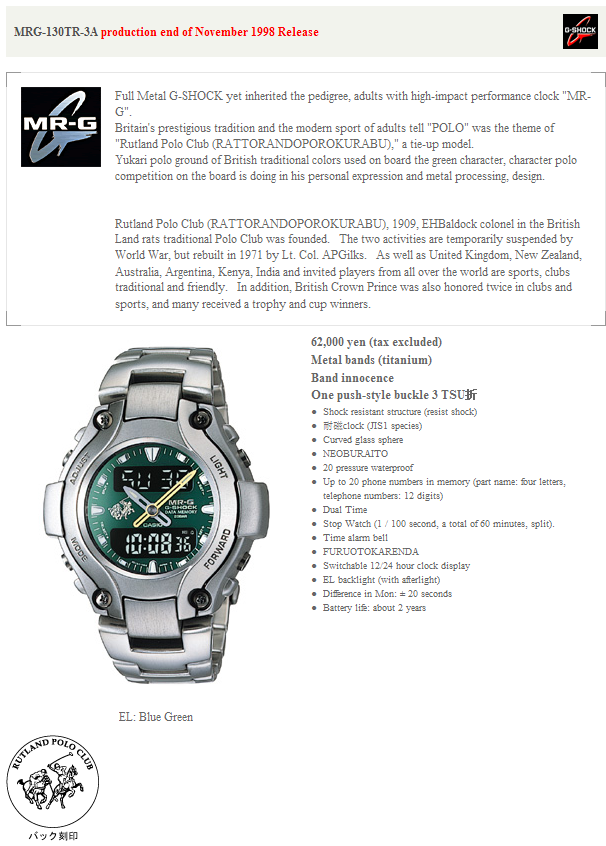 Thanks to Casio Japan for the original images and description (English translation automatically generated).

MRG-130TR-3A page in the G-Shock Image Archive - stock images and user contributed photos of this model.